In the warm summer of '21 I finally took the plunge and started streaming semi-regularly. I try to get in a few hours every week, real-life permitting.

The overarching purpose of the stream is to play — unintendedly badly — games from 1983 and up, year by year. You see, apart from the usual turbo-tape classics, there are tons of obscure games that I never got the chance to play back in the 20th century when I was young and adorable.

That's no way to have lived.

So, what better way to improve existence than to enjoy some light-hearted retro-gaming among like-minded friends?

I also feature SIDs, demos, musicdisks, requests, newer games or other C64 related content. Mostly on an Ultimate 64 Elite sporting authentic 6581AR4 and 8580R5 SIDs, both from my peak year of 1987.

No gimmicks. No bits, rewards, chat games or similar. The only exception is Pick-a-Tron™, an A.I. (cough) that randomly selects games, and assists my spotty memory by keeping track of games played.

You're welcome to join in. Participate in the chat like an adult, or simply lurk — Your choice. I still hope you'll find some entertainment, however you choose.

Schedule: Still settling in, but so far it looks like Wednesday or Thursday starting 20:30 CEST is most plausible. I also like to come on some Fridays and Saturdays, all depending on how much beer I had.

There are gems to be found in the rubble. I'll make an effort to regularly feature the games here. So if you happen to like the kind of games I like, then maybe you'll find something interesting here, too. The list is kept newest to oldest. 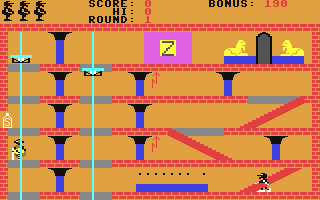 Gnome
1984 Ing. W. Hofacker GmbH
This strange game first appeared to be another impossibly hard, buggy mess. But layer after layer of depth came to the surface, making it a hidden jewel well worth playing. Hint: Moving about is actually in 3D! And, oh, dust off that German dictionary. Rumour has it that this will get an update, somehow...

Some games are worth a revisit, and may even be promoted to Gems at a later time. 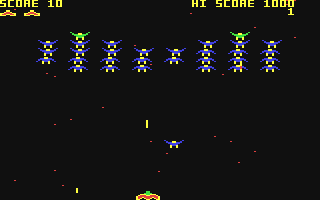 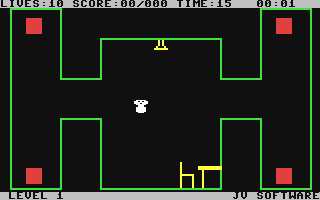 Mystic Mansion
1984 US Gold
The simple graphics hides a challenging puzzle journey through the vast mansion. 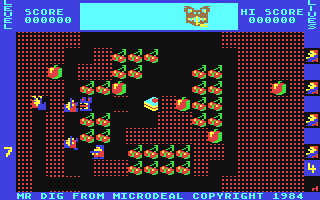 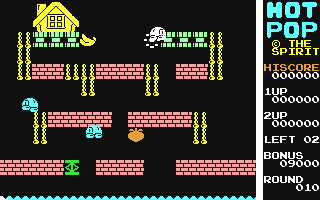 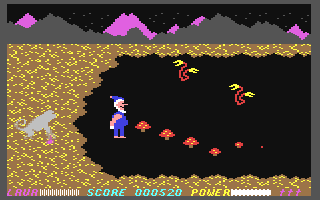 WitchSwitch
1984 English Software
Fun little children's (?) game that has you morphing from one animal to the next. 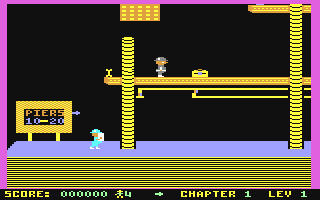 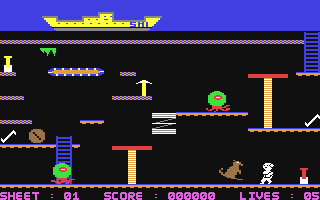 Smuggler
1984 Abbex Software
Frustrating but intriguing puzzle-platformer. How many "sheets" could there be? 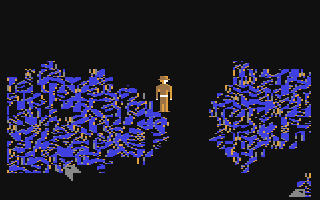 Caverns of Khafka
1984 Cosmi
Paul Norman strikes again with more great music in a very mysterious and alluring game. Is this even finishable? 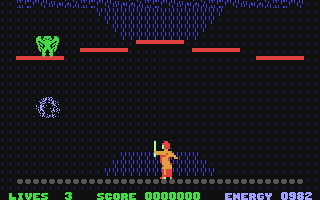 Front Runner
1984 Storm Warrior
Don't remember why this was tagged, but there's something to it. 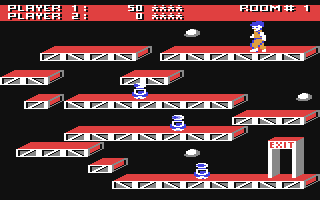 Access Software
1984 Ollie's Follies
Another Frank Cohen game that has a recognizable style and some good mechanics. 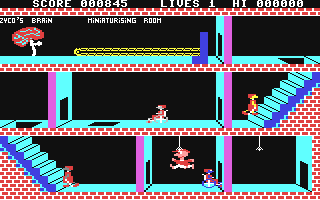 Mind Control
1984 Mastertronic
Tough platforming by the Darlings. It's one of those potentially rage-quitting games that you just have to have another go at. 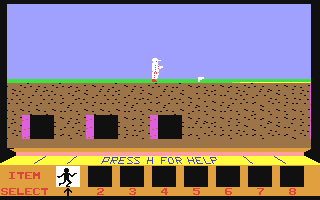 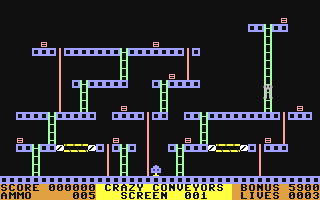 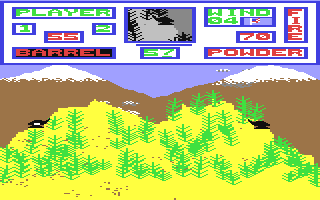 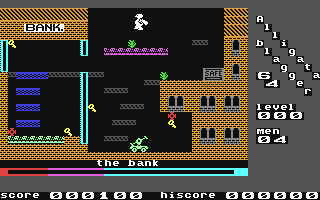 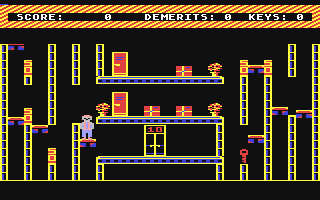 Cohen's Towers
1983 Fanda / Datamost, Inc.
Can the newly hired mail-room boy make his way up the ranks? Or will he be demoted by poodles or falling potty plants. 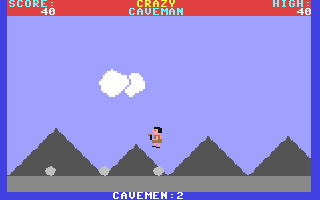 Crazy Caveman
1983 Merlin Software
Cavemen and dinosaurs, they used to live together in harmony. Until now. 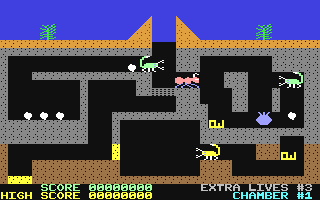 Fire Ant
1983 Mogul / Victory Software
Mike Wacker! Simple and effective graphics, and some puzzling to be had. 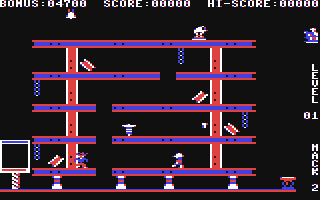 Hard Hat Mack
1983 Electronic Arts
If we can hack that annoying guy on the right away, it could actually be playable. 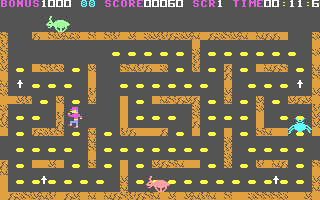 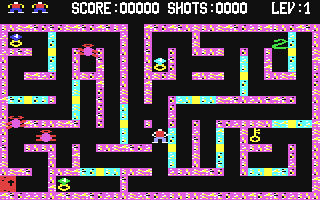 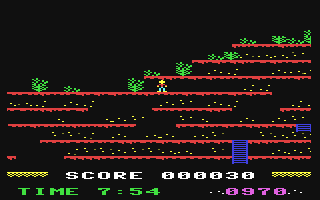 Mountain King
1983 Beyond
Who is the Mountain King, and how to we get there? We have to find out! 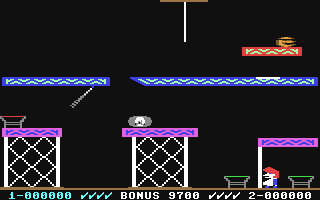 Sammy Lightfoot
1983 Sierra Online, Inc.
Sammy makes his way through levels of loads-of-stuff happening, which I love. Now, if I can get past level 1...

I thought I'd also keep a list of two player hotseat games, to be played by two humans in the same room. Any streamers out there with friends? Anyone? 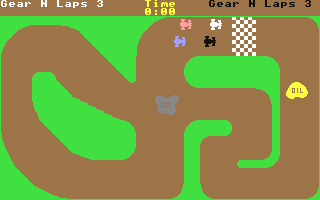 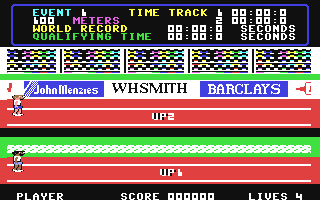 Daley Thompson's Decathlon
1984 Ocean
I prefer the original Decathlon, but this can still be fun against a friend. 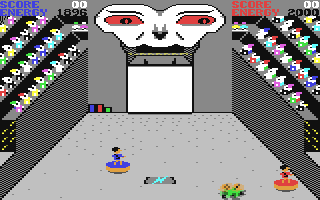 Warriors of Zypar
1984 Synapse
Once you get grip on the ruleset, this looks like it could be a quite fun 2-player arena game. 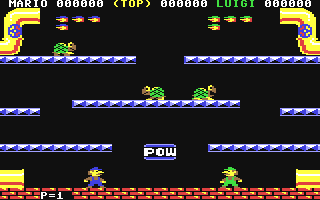 Mario Bros
1984 Atarisoft
Bump those turtles with a friend. Most probably knows the Ocean version, but this one is also fun. 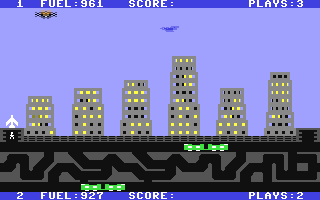 Save New York
1983 Creative Software
Defend the big apple from aliens, and duke it out in the subway. My friends and I used to play this every time we turbo-taped it.